The Riddles of Gestumblindi: Riddle 5

To begin with, here's the answer to Riddle 4:

"Your riddle is good, Gestumblindi, but I have guessed it. That is a hammer that, as he is being held by a goldsmith, screams loud when he comes down on the hard anvil, and that is his road."

"What is that wonder,
That outside I saw
Before Delling's Door*;
Both turning, two
Breathless ones
A wound-leek seethed?
Heiðrekr king,
Think on this riddle."

*This is a difficult kenning. It seems that Dellingr was probably a god, the father of Dagr, the personified day. Dellings durum probably means something like "sunrise." This is the first of a sequence of three riddles which refer to Delling's Door, and there are two more later in the saga.

The Riddles of Gestumblindi: Riddle 4

If you're just joining us, we're going through the Riddles of Gestumblindi, a passage from Herverar saga in which Oðinn, disguised as a troublesome lord named Gestumblindi, has engaged in a riddling match with king Heiðrekr. This riddle contest may be of particular interest to Tolkien fans, since according to John Rateliff's History of the Hobbit, it is almost certainly the Urtext for the famous "Riddles in the Dark" passage in The Hobbit.

To begin today's post, here's the answer to Riddle 3:

"Your riddle is good, Gestumblindi, but I have guessed it. You lay in the shade where dew had fallen on the grass, and with it you cooled your lips and stopped your thirst."

"Who is that shrill one,
who walks hard ways
where he has often fared,
many and firm are his kisses
because he has two mouths,
and on gold alone goes?"
Heiðrekr king,
ponder this riddle."

I'll post the answer, along with the next riddle, later this week. In the meantime, you like Heiðrekr can ponder this riddle!

The Riddles of Gestumblindi: Riddle 3

First, the answer to Riddle #2:

"Your riddle is good, Gestumblindi, and I have guessed it. You journeyed across a bridge, and there was an oar-way [river] under it, and a bird flew over your head, and on both sides of you, and that was their way."

"What was that drink
Which I drank yesterday?
It was not wine nor water
Nor even ale,
Food it was not;
Yet I went thirstless thence?
Heiðrekr king
Ponder this riddle."

*more about this way of referring to "yesterday" here.

The Riddles of Gestumblindi: Riddle 2

First, the answer to the first riddle:

The King said: "Your riddle is good, Gestumblindi, and I have guessed it. Bring ale* to him--'tis ale that lames the wits of many, and many become more talkative when ale gets the upper hand, but for some the tongue gets entangled, so that they cannot speak."

And now for the second riddle:

"From home I journeyed,
From home I made a journey,
Looked I on a way of ways;
Was there a way under
And a way over
And ways on all sides.
Heiðrekr king
Ponder this riddle."

As before, I'll post the answer in a few days. Until then, you like Heiðrekr can ponder this riddle.

*The word translated as ale here is mungat, which might also refer to small beer.

Currently reading: Homeric Moments: Clues to Delight in Reading the Odyssey and the Illiad
Current audio book: The Fellowship of the Ring
Currently translating: Das Ludwigslied
at March 26, 2018 No comments:

The Riddles of Gestumblindi: Riddle 1

If you read this blog, you know I am doing some work with Hervarar saga. One of the more memorable moments in the saga is when Oðinn engages King Heiðrekr (the current possessor of the cursed sword Tyrfingr at that moment in the saga) in a riddle contest. Oðinn is disguised as Gestumblindi, a powerful lord who had refused to pay King Heiðrekr tribute. Heiðrekr's practice for resolving disputes was as follows: they must either submit to the judgment of his counsel, or best the king (who was not called "the Wise" for nothing) in a riddle-contest. Oðinn, for his own reasons (as usual) has gone to Heiðrekr disguised as Gestumblindi and engages with him as follows:

For fun and practice, I'm going to be translating the riddles themselves. I'll post a riddle, then the answer to the riddle as well as the next riddle in the following post. Feel free to follow along with me and match wits with Oðinn himself.

(1) I wish to have today
What I had yesterday,
Ponder what that was:
Men it mames,
Speech destroys,
And speech inspires.
Heiðrekr king,
Ponder this riddle.

Verb Transitivity and the Dative Case in Old Norse

‘a good many verbs take a direct object in the dative…’ (Barnes 35) So Michael Barnes introduces a simple concept which may nevertheless perplex the unwary beginning student of Old Norse: the fact that there are a number of verbs in the language which take their direct objects in the dative case. While other old Germanic dialects do this to a lesser degree, it is in none of them as common as it is in Old Norse; G. Holland has identified over 200 Old Norse verbs which can take the dative case as a direct object (Holland 29-37).

Typically, in an inflected Indo-European language such as Latin or Ancient Greek, transitive verbs take a direct object in the accusative case. But these languages will often also possess some verbs which take dative or (more rarely) genitive objects. The common understanding is that this is caused by case syncretism.

Proto-Indo-European had at least eight noun cases. Among these were an ablative case (often used to express motion away from something), an instrumental case (used to express an action taken by or with an object), and a locative case (used to express that the subject is in a certain location). Indo-European languages merged these cases to varying degrees. Latin, for instance, retained the use of the locative and ablative. But the instrumental case was merged with the ablative, leading to such constructions as liber a discipulo aperitur [‘the book by the student is being opened’]. This merging of cases is known as ‘case syncretism.’

Proto-Indo-European also had a dative case, originally used to denote the indirect object of a verb. Proto-Germanic merged the ablative and locative cases into the dative case. Old Norse further merged the instrumental case into the dative case. There are several explanations for this sort of case syncretism, including historical phonology and a loss of verbal prefixes Proto-Germanic used to indicate the appearance of a dative, instrumental, or ablative object (Holland 21).

By this argument, the dative form beinum in the phrase ‘hann kastar beinum smám um þvert gólfit’ [‘he throws small bones across the floor’] is a remnant of an instrumental sense in which throwing was conceived (compare the Modern English phrase ‘he splashed the ground with water’). But there are many examples that implied instrumentality does not satisfactorily explain:

skjóta hesti undir einhvern [‘to put a horse under someone, to mount someone’]

…the hunt for surviving traces of earlier case values in such examples has obscured the basic fact that these Old Norse verbs with dative objects are functionally equivalent to ordinary transitive verbs with accusative objects. (Holland 24)


Holland’s proposed solution is that such uses are constructions, and optional ones at that, used to indicate a causal relationship between subject and object. “The unifying semantic feature of this construction is that all of these verbs impart motion to, or control the motion of, their dative objects.” (Holland 26) A key feature of Holland’s argument is that this relationship was indicated by a suffix in Indo-European and Proto-Germanic which was lost in the Northern Germanic dialects. Adapting the dative case to indicate this relationship may have been a strategy adopted by the speakers of Old Norse because it was “synchronically opaque… it was simply the dative…” (Holland 29).

Although Old English is usually taught in a standardized form to beginning students of the language, it would be a mistake to assume all texts from the Anglo-Saxon period to be as linguistically homogenous as Modern English literature. Not only was there variation over the 700-year period when Old English was written and spoken, but surviving texts also demonstrate what appear to be a variation in dialects. Scholars since Sweet have divided these dialects along regional lines: Northumbrian, Mercian, Kentish, and West Saxon—the latter of which is the source of the normalized form of the language taught today.[1] Although these categories have their uses, it is important to note that they may imply a level of stability and distinction which may not have existed historically (History of English 396).

The dialect categorized as Mercian is traditionally understood as corresponding to a dialect of Old English spoken in the Midlands of England—between the Mersey and the Humber in the North and the Thames in the South—under the rule of the Kingdom of Mercia. But Campbell has noted that the name Mercia is “practically without territorial significance,” since the distinguishing features of the Mercian dialect are comprised of the agreement between four major texts. Of these texts, the late tenth-century Rushworth Gloss is part of a manuscript which also contains work by a Northumbrian scribe (History of English 402). The other Mercian texts are from Lichfield and the area east of the Severn Valley. For this reason, Hogg suggests calling this dialect “Lichfield Mercian,” since we do not have enough evidence to suggest that these texts are representative of the whole Midlands (An Introduction to Old English 126).

Phonologically, Mercian is characterized by a process called Second Fronting. As the name implies, this was a continuation of First Fronting, a mutation which took place in the Anglo-Frisian languages as they diverged from West Germanic, by which the long vowel [a:] was fronted to [æ:]; compare Gothic laisjan ‘teach’ to Old English *lārjan > lǣren (Prokosch 2009). Alone of the Old English dialects, Mercian continues this trend, raising the vowels /a/ to /æ/ and /æ/ to /e/ (History of English 403). Mercian is also distinguished by morphological and syntactical features, such as the -u ending for the first person present indicative singular, and the comparative rarity of the negative contraction. (An Introduction to Old English 137).

Whether or not Mercian as we know it was a spoken dialect throughout the English Midlands, it does at least appear to have developed as a “focused” literary language by the early ninth century—well before the development of the West Saxon literary tradition. The influence of this Mercian literary tradition extended beyond the Norman Conquest, as demonstrated by the twelfth century The Life of Saint Chad and the AB literary dialect of Middle English (History of English 404).

Of course Mercian has arguably had the most lasting imprint on popular culture of any dialect of Old English: Tolkien renders the "Old English" of his Rohirrim not in the "standard" West-Saxon form, but rather in their (usually reconstructed) Mercian parallel forms. So Saruman instead of "standard" Searuman, Hasufel instead of Heasufel, and so forth.

Kemenade, Ans van, and Bettelou Los. Handbook of the History of English. Wiley-Blackwell, 2009.


[1] Though Hogg considers it doubtful that a regularized form of West Saxon which served as a historical “Standard Old English” existed. (Hogg 401) 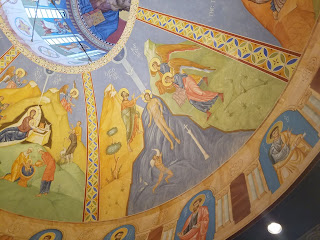